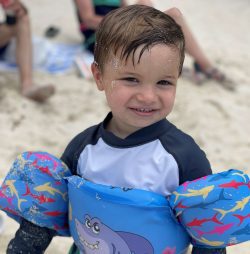 To see Ray Tarpinian playing tee-ball with his friends, cruising around on his micro scooter or romping in the backyard with his older sister, one would never know that he had suffered a serious health scare earlier in his life — one that could have permanently impaired his balance, coordination and communication skills.

Had it not been for the vigilance of his parents, swift action by his health care providers and more than a year of concentrated work with the Aspire Early Intervention team, Ray’s outcome could have been quite different. But today, the happy and active three-year-old from Marblehead is right back on track and hitting all of the developmental benchmarks for his age group.

It all started in February of 2021 when Ray was 18 months old and his parents noticed that he had become a bit unsteady on his feet. “At the time, he was already a strong and confident walker and all of a sudden he began to look a bit wobbly, almost like he had vertigo,” says Ray’s mom, Maureen.

Concerned by this unusual change in Ray’s stability, his parents brought him to see his primary care physician for a checkup. While nothing out of the ordinary was detected, a neurology assessment was scheduled for later in the month, just to be safe. 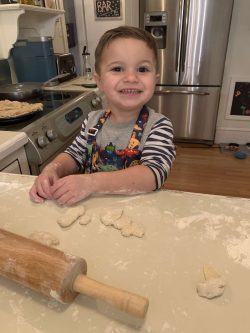 Before that date arrived, however, Ray continued to have balance issues and one day got physically ill for no apparent reason. His parents grew increasingly worried and took him to the emergency room at a local hospital. The attending physician also found nothing wrong after examining Ray but referred the Tarpinian’s to Boston Children’s Hospital for a more thorough evaluation.

An MRI at Children’s revealed, much to everyone’s shock, that Ray had a benign brain tumor the size of a golf ball between his spinal cord and cerebellum that was impacting his center of balance. The placement of this tumor was such that it was also blocking Ray’s spinal fluid from flowing properly, causing it to pool on the top of his brain. Emergency surgery was scheduled to remove the tumor and prevent a seizure, stroke or something worse. 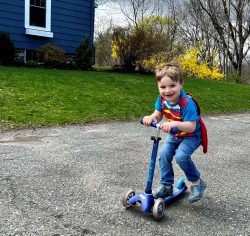 team consisted of a physical therapist, speech pathologist and development specialist. On a weekly basis, each would visit Ray at his home to help sharpen his fine motor skills, relearn how to walk and address all related speech and developmental delays; his parents also received education and coaching. The positive results came quickly — Ray was up and walking on his own within a week — and hasn’t stopped since.

“The team at Aspire was truly phenomenal,” says Maureen. “Ray loved them all and looked forward to their visits. I attribute his recovery to their hard work and dedication. We will be forever grateful for all they did for our family.”